At Maths Week London, we want learning maths to be as fun and inclusive as possible! To make this happen, we work with charities like the Mayor’s Fund for London to provide funding for schools that will allow for more educational resources to better education and encourage children to reach their full potential.

This year the Mayor’s Fund for London ran a small grants scheme available for London schools to support a maths-based project or activity to run during Maths Week London. The applications opened in March 2022 and prioritised schools in areas of deprivation with a higher percentage of pupil premium eligible students. 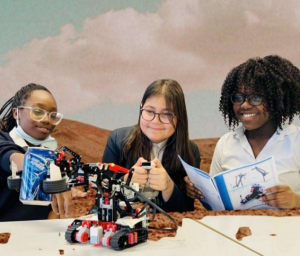 Thanks to the Maths Week London partner’s contributions, 14 schools across eight London boroughs received a £250 grant – let’s see what they got up to!

Marion Richardson Primary School and Mowlem Primary School in Tower Hamlets ran an ‘Enterprise Week’. The children were given a budget to make and sell snacks. Children sold to each of their phase and calculated profits.

“As a school we found that this event has helped the children to see maths in real world. The children were enthusiastic and showed a great determination to use maths as a tool to help them achieve their goal. The grant helped children to receive a budget and use to create their own business which involved all children even those children that finds maths difficult.”

Frederick Bremer School in Waltham Forest organised a trip for Year 7 students to Bletchley Park and were able to subsidise fees for pupil premium eligible children.

“We used the grant money to subsidise a trip to Bletchley Park with Year 7. It helped give access to an enriching experience to students who otherwise would not be able to afford it…. The trip was an excellent motivational tool, and encouraged more students to engage with Maths, as well as witness the practical application of Maths and code-breaking during a historical event such as the World War.”

Godwin Primary School in Barking and Dagenham hosted an all-day workshop for all school pupils, with a particular focus on notable female mathematicians.

Launcelot Primary School in Bromley used the grant to buy playing cards. Some large set for teachers & a normal pack for every child in the school. Through the week, they learnt games that explicitly develop number skill as well as traditional card games where number skills are used but may be less obvious. Parents & carers joined children in class on Friday afternoon to play card games. Each child then took a pack of cards home so they can continue with this.

“We found many pupils had not used playing cards in any way before. They engaged readily with playing a variety of card games, even those who are less confident or less engaged in formal maths lessons. Having a pack of cards for each child to take home particularly supported underprivileged children who simply would not have been able to engage with this kind of activity at home without this opportunity.”

St Joseph’s Catholic Primary School in Lewisham worked with their Head Boy and Girl to champion maths activities and initiatives across the school.

Thomas Tallis School in Greenwich invited Dr Eugenia Cheng and Rob Eastaway to speak to the school. Dr Cheng addressed the Year 12 cohort about the way that mathematics can help to re-evaluate gender in society, and Rob delivered a quiz session with Years 7 and 8 that highlighted the joys and surprises of mathematics. 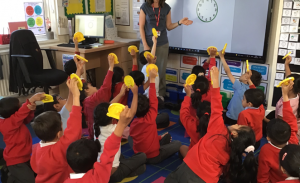 “Due to budget cuts, we have not been able to afford to buy resources to support Maths learning, however, due to the grant we were able to purchase sets of clocks to support the pupils’ learning of time. This had a particular impact on those children who do not always access learning at home and rely solely on school for supporting them with maths/life skills such as time-telling.”

Finally, Elmgrove Primary School & Nursery in Harrow applied for the grant so that they could buy the 24® Game to use in class, clubs, and tournaments – including an exciting ‘Teachers vs Students’ event. Their incredible efforts certainly paid off, as during Maths Week London, the team from Elmgrove Primary were crowned Count On Us Maths Challenge champions at City Hall.

We hope by sharing this year’s amazing accomplishments that schools will gain plenty of inspiration about how to celebrate Maths Week London 2023!

Make sure to sign up to hear when next year’s Grants Fund applications will be opened by clicking here.

If you would like to get your school involved in the Mayor’s Fund for London’s maths programmes throughout the year, the Count on Us Maths Challenge is now open for registrations.

Click here to find out more about the Secondary Challenge which is run in partnership with the Jack Petchey Foundation and here for the Primary Challenge.